This site has limited support for your browser. We recommend switching to Edge, Chrome, Safari, or Firefox.

Do You Have PTSD? Types of PTSD, Symptoms, and How to Manage it.

This Sunday is National PTSD (Post-Traumatic Stress Disorder) Day. At Fait avec Coeur we understand how important it is to care for our emotional state in order to maintain a healthy life. So we’ve dedicated this post to those who suffer from PTSD.


In 2010, Senator Kent Conrad pushed to get official recognition of PTSD via a “day of awareness” in tribute to a North Dakota National Guard member who took his life following two tours in Iraq. It’s fairly common knowledge that men and women who go to war come home a different person - if they come home at all. As the stories say, war changes a person.


It isn’t just war veterans that suffer from PTSD. It can come from any traumatic event in a person’s life, big or small. Some people may not even realize they’re suffering from PTSD, so here we discuss the causes, the symptoms, and ways you can deal with PTSD.


As mentioned earlier, anything that is traumatic, usually in the form of abuse or neglect can cause a form of PTSD. The most common causes are:

There are many other ways trauma can occur. We’ve all been through life events, and we deal with things differently to one another. Imagine going through the same event as one of your friends or siblings. It’s likely that you will both react and be affected by it differently—perhaps at differing lengths of time.


There are five types of stress disorders identified, according to Best Day Psychiatry. These are:

This type of PTSD is normally caused by events such as accidents, injuries and illnesses. Many of us have probably experienced this kind of PTSD in some way. It’s defined when unreasonable amounts of tension and stress can cause the onset of a Normal Stress Response. It can generally be managed through talking to friends and family for support, and usually doesn’t last for long periods of time.

This is a precursor condition, and may develop into PTSD if left untreated. Caused by life-threatening events, like natural disasters, loss of a loved one, or job risk, these high-stress events can cause Acute Stress Disorder. It can be treated through therapy, medication, and psychiatric treatments.

Uncomplicated PTSD is linked to one large traumatic event, rather than multiple events, and is the easiest form of PTSD to treat. Like Acute Stress Disorder, Uncomplicated PTSD can be treated using medication or therapy.

You can probably guess that, as the name suggests, Complex PTSD is complicated. This is due to it being caused by multiple events, such as domestic abuse, or exposure to war. The difference between Uncomplicated and Complex PTSD is the effects it has on a person. Complex PTSD can be diagnosed with borderline or antisocial personality, or dissociative disorders. Substance abuse, sexual impulsivity, anger issues, and depression are all common behavioral issues that come hand-in-hand with Complex PTSD.

Comorbid PTSD is a blanket term for co-occurring disorders. Often people will suffer from more than one condition, and can cause much of the same behaviors as Complex PTSD. The best treatment is to see a professional.


We touched on some of the symptoms in each type of PTSD, but to go into more depth, the condition can affect a person in many ways. Having PTSD can make it difficult for a person to:

Twelve of the most common symptoms, according to PTSD survivor Lily Hope Lucario are:


What to Do if You, or a Loved One is Suffering

If you realize that you might have some form of PTSD, seeking help is imperative. We list places you can get help at the end of this this article. If someone you love is suffering, it can be difficult to help them, as oftentimes they won’t want your help, or they don’t believe they need help. So, while it can be difficult to navigate, it's important to be there for them.

What Shouldn’t You Say?

Here are some things you should never say to someone who is suffering from PTSD, and what you can say instead, according to Katie Waskowiak, emotional health writer:

Do not say: “It wasn’t even life threatening”.

Try instead: “I know you’re scared because of it, but you're safe now”.

Do not say: “People have been through worse”.

Try instead: “You can get through this hardship.”

Do not say: “Stop over-reacting”.

Try instead: “I understand you’re scared, but I’m going to be right here next to you the whole time so that nothing happens. Let’s do this.”

There is no alternative response to this — but there is an alternative reaction: educate yourself on the disorder so you can better understand what your loved one might be feeling.

Do not say: “I’ve been through something similar and I don’t have PTSD, so you don’t have it either”.

Again, educate yourself. You do not know someone’s story; maybe this event was the straw that broke the camel’s back (or you know, the event that “broke” the brain). Not everyone who’s been held up at gun-point has post-traumatic stress disorder, just like not everyone who’s been raped has PTSD. Someone who was shot in the ankle may be perfectly OK mentally, but that doesn’t mean someone having been robbed is.

Try instead: “I know that your brain is telling you that everywhere you go and everything you do could cause a trigger/you to feel as if you’re in danger. Try to keep repeating to yourself that you are safe, no one is going to hurt you and you will be OK.”

Do not say: “Stop being so dramatic.”

Try instead: “Deep breath. Let’s talk through this. Why do you feel this way?”

What if You’re the One Suffering?

It’s incredibly important to seek help if you have PTSD in any way. Even the mildest form of PTSD can affect our relationships, our careers, and our growth as human beings. We’re living in a time where it’s more acceptable to ask for help. There are many options available, and it is completely confidential.

SAMHSA’s is a free national helpline in the US. You can seek help from a licensed therapist in person, or get instant online access to therapists using platforms like Better Help. Group therapy - online or in-person - is also a great option - try Pace or Sondermind. Or for something more immersive, there are also retreats you can go to, like The Recovery Ranch in Tennessee.

We hope that this guide helped shed some light on PTSD, and we urge those who are suffering to please get help. It’s out there waiting for you, you just need to take the leap.

Emma Masotti is an Australian now living in Austin, TX, and has been a trained esthetician for over 15 years. She is a sustainable skincare writer, educating and building awareness around proper skin health that doesn’t cost the earth.

Some of the products promoted in our blog are from our online store. Many others are brands we have researched and found to be great examples of sustainable, ethical, and innovative brands in their field, and we don't make any profit from mentioning them in our blog. #CollaborationOverCompetition

Now that we’re full speed ahead into the new year, it’s time we all started making some changes to our lifestyle so we can all lower our carbon footprint. But where do you even begin? The products in your bathroom? Your makeup bag? How about the cleaning products under your...

How Long Does it Take For Skincare to Work?

When we start a new skincare ritual or add a new product to our current ritual, we often become impatient and want to see results quickly. But investing in our skin takes time. In this article, your most-asked skincare questions will be answered.

We often get asked how to pronounce our name, Fait avec Coeur. It varies depending on where you’re from, but the French pronunciation is “fair-ve-ker”.    Fait avec Coeur means “made with heart”. In 2020, when our founder Yuan was deciding on a name, she didn’t want to create a...

9 Ways to Travel More Responsibly in 2022

Since the start of the pandemic two years ago, many of us found life at a standstill for a period of time. But two years on, we’re learning to live in this new normal, which also means many of us are traveling again. Something you may not have thought about...

Let customers speak for us

I love it. I can't tell you how much. My hair has never been this healthy, shiny and strong. I bought it because I read that silk helps retain moisture from products and reduces the friction that causes our hair to wake up full of knots and breakage. And 100% it does the job. My hair was super damaged before, and now it looks like I've done a thousand treatments when all I did was swap my pillocase. Miraculous!

This silver ion infused 30 momme silk pillowcase is pure luxury and works wonders for fighting acne! I’ve purchased all kinds of different pillowcases, this is hands down the best quality one. As a long-term member of the acne club, it's extremely exciting that after only a few months, my stubborn acne is almost completely gone! It's now the vital last-step of my night skincare routine. 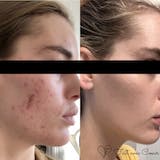 The warmer seasons are approaching and I've been struggling to sleep comfortably because of the sweats. These sheets are sooo buttery soft, cooling, and feel super luxurious! They are deep-fitted which I really appreciate because most sheets don't fit my thick mattress. I have been loving bedtime thanks to these sheets, and eve my cat loves it too! 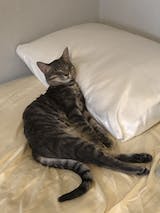 I love this mask a looooot! It is super soft and very comfy. It's neither too tight nor too loose thanks to a flexible elastic band. I don't feel any pressure on my eyes while sleeping. Which is always a huge problem with other sleep masks. And I love how large it is. It perfectly covers my eyes and areas around to avoid any light go through. I truly don't feel it while sleeping at all (unlike most of the other sleep masks I've tried). And I love the cooling effect of the silk and how soft my skin feels after I'm taking it off. I have it in grey color. Love it and keep recommending it all the time to all of my friends. 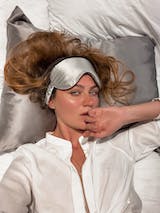 Omg! This pillowcase is so AMAZING! Finally I'm sleeping on the clouds. Can't imagine going back to regular cotton pillowcases anymore. It looks gorgeous and feels incredibly soft. And yes, it's insanely comfortable. The best thing is that my hair became less freezy and damaged after I switched to this pillowcase. And as I love to sleep either on a side or facing a pillow, my skin started to benefit from it too. I got rid of “sleep lines”. I have it in the color grey. The quality is amazing, and it has a legit hidden zipper that keeps the pillow in place. Highly recommend! 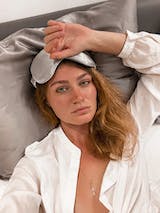